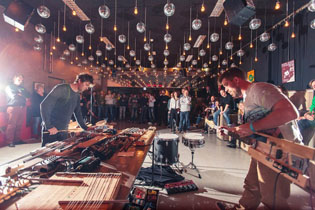 This two-piece band consists of two clean cut and well mannered gentlemen who love to fiddle, bang, slap, jerk and play around with self built instruments and well.. everything else that makes noise. When these guys play a venue near you, you are in for a treat! Sonic madness like you won't experience a lot. The 'electric noise' that comes out of their interesting musical approach combined with drum loops and guitar certainly makes for one of the most interesting acts around. So naturally, we are very proud to release their debut album on Geertruida.

Who are the two masterminds behind Bismuth? Well let's introduce them a little further:

The multi talented Yuri Landman has been active for a long time, working on various musical projects all over the world. When he is not creating and building weird looking experimental instruments he is giving workshops and lectures on how to build them yourself. Modifying and building guitars for the likes of Sonic Youth, Half-Japanese, Liars and Health (to name just a few) got him a lot of international attention as well, and his interesting ideas on music and instruments have also brought him to the spotlights of the TEDX stage. But the Dutch music minded audience might already know him from his days in Dutch band Zoppo, that has been a personal favourite for years in Geertruida.

Arnold van de Velde marked his presence in the Dutch music scene most notably with well received acts Feverdream (disbanded in 2008), At No Bikini Beach (released a debut on Dying Giraffe Records) and Neon Rainbows (Subroutine Records). Next to being an all round musician, Arnold is frequently found behind the mixing board. Releasing EP's, albums, touring internationally, sharing stages with Blonde Redhead. Arnold has done it all.

In the links section on the side you can check out all the stuff these guys did before.