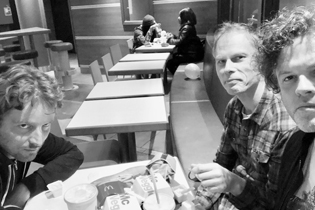 Fine China Superbone are a noise-/mathrock outfit from The Netherlands that started out around the year 2000 and soon got a reputation for their manically raging noise/punk rock shows that were known for disruption and chaos. The release "How long is a Chinese" (2002) reflects the sound of that period, influenced by bands like Unsane, Dazzling Killmen, and the like.
After the vocalist left the band they continued as an instrumental fourpiece. No vocals meant freedom to use more layers and complexity in the songs, of course without losing track of the vintage Fine China Superbone chaos en nervosity, with the guitar riffs twisting and grinding all against each other, and around the quirky patterns laid down by drums and bass. The second release 'Make Machine' (2010) found its way from the famous Next to Jaap studio (R.I.P. Corno) to the famous Narrominded label.

Since about 2012, Fine China Superbone are back in the original threepiece form. With a back to basics filthy distorted sound, loads of new riffs and ideas, and the return of the human voice. All of this resulting in a bunch of abrasive, twisted, post noise/math rock. Nerve racking at times, a little evil; fuckin' nasty, brother! But in the end, no harm is done to your souls; we just like to wrench your gut a little, not kick you out into the dark. No! Have another drink!

In 2017 they found themselves playing tighter than ever, and so it was time for another album, which they recorded and mixed in the great city of London in january 2018 with Wayne Adams at his Bear Bites Horse Studio – a place where many other great records were recorded (USA Nails, Death Pedals, Nitkowski to name a few). This fine record 'Plaguey' is proudly presented to you by the Geertruida record label. Great cover art was provided, like for previous FCSB releases, by Dutch artist Zeloot.