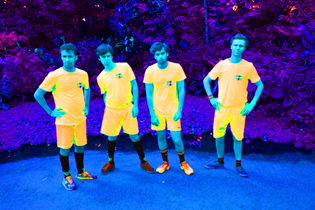 From when they first started, crammed into a mates grandma’s garage, sweltering in the windowless heat, spliff in hand, a back and forth Liam Gallagher-esque banter is present stating how they will be the best band ever. Their ‘arrogance’ is overshadowed by their undeniable admiration for their musical heroes, to name a few Splashh, DIIV (from New York), Homeshake and not to be forgotten Elton John. Conversations that aren’t about music are short lived in this circle.

Besides developments in their sound, it’s charming to see that little has changed. These are still four best friends who love music and cannot get enough of making it, go to one of their gigs and you’ll see that it shows. Mo’s ninja kicks and quite impressive Stu McKenzie like spine-bending, Flows ‘zen vibes man’, Koen’s solid focus and Sjoerd’s iconic stank face. This pretty much sums up the boys personality differences, but listen to their music as a collective and it’s clear why they’ve been friends for years. Bedroom recording project turned four-headed band.