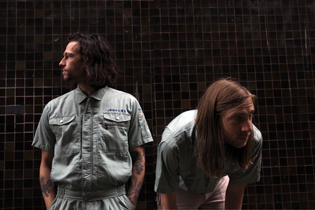 TFK's daredevil stage antics and smoldering, cataclysmic garage punk anthems notwithstanding, the duo manages to elude their odds-on spectacular collapse. Westerlaken still wields a myriad of (custom) guitar effects like some punch drunk orchestra conductor, while Heijmans seems inclined to inflict havoc on his skins for the sole purpose of quelling the inner voices in his head.

Any other band might've been at each others throats, but TFK seems to take it all in stride with demented bemusement. As their spur-of-the-moment 'let's start a band' pact a decade ago betokens, Heijmans and Westerlaken entrust their creative instincts to chaos and randomness instead of letting those things to impede on their delightfully knee-jerk stage dynamic.

Naturally, the follow-up to TFK's dumbfounding debut Zero Gravity Somersault Craze, Oh, Nothing seems likewise rooted in the inherently chaotic reality we live in. These songs aren't spurred by anthropologist agendas or brooding kitchen-sink angst. Moreover, TFK would rather explore the possibilities of a parallel universe created by the Ryan Gosling/Macaulay Culkin T-shirt meme, or the titillating qualities of fashion designer Jil Sander's work.

Before the imagination can run rampant, you have to start with an empty canvas.. a void of sheer nothingness. And luckily, TFK embrace sheer randomness and escapism for the sake of just THAT.