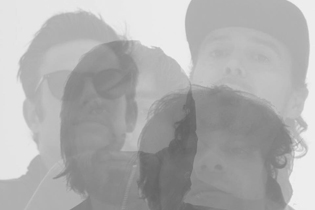 Yardlets were formed in the winter of 2010 by Sam Goldberg Jr. and Jeff Edwards. The two long time friends started writing songs together as an experiment. Getting together on Goldberg's breaks from touring with Broken Social scene they would force themselves to write a song a day and record it front to back quickly on a laptop.

Catching the ear of Sebastien Grainger (Death From Above 1979), who donated drum duties to their "Buddy Holly on acid" Middle Ages 2012 debut, their experiment came to quick fruition. Enlisting David Deias (Mystic Motorcycles) for further drum duties and Tim Fletcher (The Stills) on bass, Yardlets continue to play regularly and are a vital part and reflection of the Montreal music scene. Their unique mix of glitchy punk garage noise along with their own sensory overload light show make them a go to act live.
Band portrait by Leo Hamel